After months of speculation, Prince Harry and Meghan Markle have confirmed that they are making it official. The young royal’s father, Prince Charles, confirmed the news this morning in a press release via Clarence House. In the release (shown on the left) on behalf of the Duke and Duchess of Cornwall this morning said: 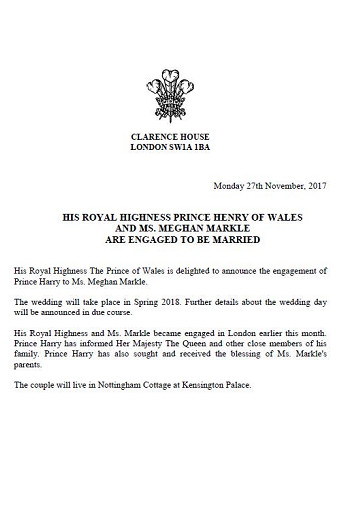 A release (shown left) shared on behalf of the Duke and Duchess of Cornwall this morning read:

The wedding will take place in Spring 2018. Further details about the wedding day will be announced in due course.

His Royal Highness and Ms. Markle became engaged in London earlier this month. Prince Harry has informed Her Majesty The Queen and other close members of his family. PRince Harry has also sought and received the blessing of Ms. Markle’s parents.
The couple will live in Nottingham Cottage at Kensington Palace.”

10 Wedding Apps You Will Find Useful When Planning Your Wedding

The newly-engaged couple briefly appeared for a photo-call at Kensington palace this afternoon.

Royal Baby: Duke And Duchess Of Sussex Unveiled Their Son To The World Today